As much as we know for Americans turkey is the bird number one on the table every fourth Thursday of November (Thanksgiving Day), but U.S. Presidents have a Turkey Pardon ceremony each year, and school students compete to hide it from hungry hunting eyes.

Thanksgiving has been celebrated nationally since 1789, with a proclamation by George Washington after a request by Congress, but the tradition of «Turkey Pardon» emerged many years later. It is believed that the first president to unofficially pardon a turkey was Abraham Lincoln, who instructed the White House to save a bird given to the president. Lincoln’s son had grown fond of the bird (and the president was a big animal lover). But it was President George H. W. Bush who made the turkey pardon official when he took office in 1989.

Nikita Lunin (Kharkiv), last year  FLEX graduate and FLEX representative in Kherson, spoke about the history and traditions of Thanksgiving in the United States. Among them are absolutely crazy, for example, playing turkey bowling (usually roasted). In addition to Nikita, other FLEX alumni took part in the event, so they talked about this famous exchange program. Pauline, FLEX graduate from Kherson, told how she was going through competitive selection rounds. It turned out that only her second attempt was successful. Her experience suggests that you should not give up and lose your chance. The results of the program were obvious to all our visitors - excellent English, an invaluable experience of living in another country, knowledge of the culture and traditions of the United States. 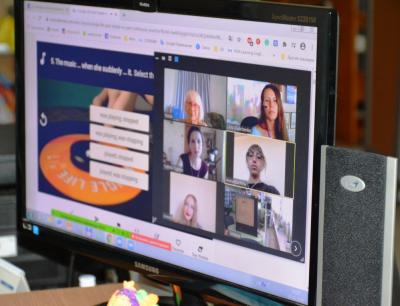